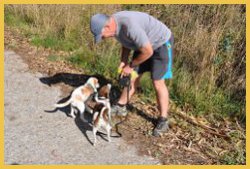 Park Ranger Sarah Cavallaro tasered Gary Hesterberg, as he was walking his two small dogs off-leash in the Golden Gate National Recreation Area, according to SF Gate and CBS Local, though there were no prohibiting signs.

Mr. Hesterberg's civil suit has been filed in federal court, with details of Sarah Cavallaro at Court House News.

How did it happen? In summary:

Gary was handcuffed for over three hours, arrested, thrown in jail and kept past midnight, altogether over eight hours! Of course, the DA declined to pursue any charges against him.

For an eyewitness account, here. There was a prior complaint about Sarah Cavallaro, that she had called "criminal" a dog walker for not using a leash in GGNRA.

Taxpayers who wish to thank Ms. Sarah Cavallaro for her contributions can reach her at Sarah_Cavallaro@nps.gov and 928.638.7811. She has transferred to Yellowstone National Park.