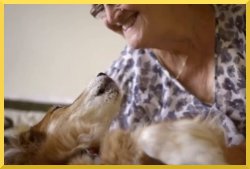 Maureen had known of the lump in her breast, and checked it regularly. One day, however, her dog sniffed her breast and became desolate. Sensing his message, she underwent a mammogram in response. The result was negative and relieved her, yet Max kept sniffing it and behaving sadly.

The dog owner decided to ask for a biopsy, which did detect a cancerous tumor. Upon arriving home, Max also detected the incision and perked up - as if he knew that humans had finally listened and taking remedy.

In the vdeo below, Maureen says that Max "put his nose across my breast to check where the operation had been and was wagging his tail and his eyes were happy ... I love Max and I owe him so much."

This is not simply an anecdote. A study verified that dogs can sniff breast and lung cancers with 88% - 97% accuracy, independently of the dog, the cancerous stage, or the victim's smoking habit.

Already running is the not-for-profit InSitu Foundation, which focuses on training dogs to detect human cancers. Check out how they train dogs to sniff cancer. The advantages are great accuracy, plus low discomfort and cost. Ongoing research is also at UPenn's Working Dog Center. Other animals' noses are powerful diagnostics.

Complementary, there are efforts to mechanize and commercialize cancer-sniffing, part of the development of e-noses for medical and military ends.

Update May 23, 2014: A new experiment finds dogs are 98% accurate at detecting prostate cancer from urine, as reported by Bloomberg and Reuters.