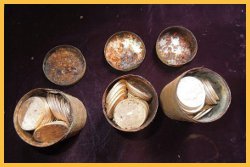 While walking its dog in Northern California, a couple found eight cans that contained about 1,400 gold coins dating from the late 1800s.

Buried at different depths, seemingly at different times, the coins were in near mint condition. One was valued at over $1 million on its own. The buried treasure is perhaps the largest found in US history.

The couple has remained anonymous, for fear of attracting a gold rush on its property. It plans to sell most online through a dealer.

Click for Reuters' article on the $10 million coin treasure.

Rejoicing in the trove has brought the attention of the federal and state taxmen, however, who are set to claim about 47%. Taxes on a treasure trove are clear, according to the IRS, if "you find and keep property that does not belong to you that has been lost or abandoned (treasure-trove), it is taxable to you at its fair market value in the first year it is your undisputed possession."